“It’s not about how much money your make, it’s about the decisions you make with it that makes the difference.”
– Nicholas Sergio

Are we experiencing a modern-day industrial revolution, similar to the three prior transformative periods that changed and formed the society that we all live in today? Let’s take a deeper look:

The First Industrial Revolution was the age of mechanical production, driven by the creation of the steam engine and how it transformed the transportation of goods and people in a more efficient and faster way.

The Second Industrial Revolution was the creation of the combustion engine and airplanes, providing the ability for society to move faster between locations. This revolution was also the beginning of the assembly line and mass production capabilities.

The Third Revolution ushered in the digital age and the creation of semiconductors, computers, electronics and the internet. In the early 90’s, as a college student I worked for Prodigy as an accounting intern. We were the first of two internet companies in the world and our competition was America Online (AOL). As competitors, we battled to connect the world via the World Wide Web. Scalability won that competition and I am sure you can figure out who won that race for internet leadership. I regress … but it was pretty awesome to review my list of stocks I followed through the Prodigy network daily on the internet.

The Fourth Industrial Revolution is the day and age we live in now. We are all living in a world of enhanced digitization that has been accelerated by the Covid-19 pandemic. This transformation is changing how we all live, work and communicate with one other. This transformation has allowed millions of people to work from anywhere in an efficient and, in some cases, a more productive manner. This transformation didn’t take years but rather weeks and was possible due to evolutions in technology that allowed for highly stackable, scalable systems to be deployed over a digital cloud. Wow. This revolution and change to societal communication, business operations and relationships is just beginning. This multi-year secular growth story will be fueled by advancements in autonomous vehicles, wireless technologies, artificial intelligence (AI), Internet of Things (IoT), 5G wireless technologies and the evolution of 6G technology. Who knows what future changes will be but we can be certain that society is changing as technology transforms our everyday lives?

After a decline of 34% earlier this year, the sixth steepest decline on record, and a closing low of 2,237 on March 23rd, the S&P 500 tagged an all-time closing high of 3,580 on September 2nd. This massive move up in price for the S&P 500 was confirmed by and S&P 500 cumulative advanced decline line. 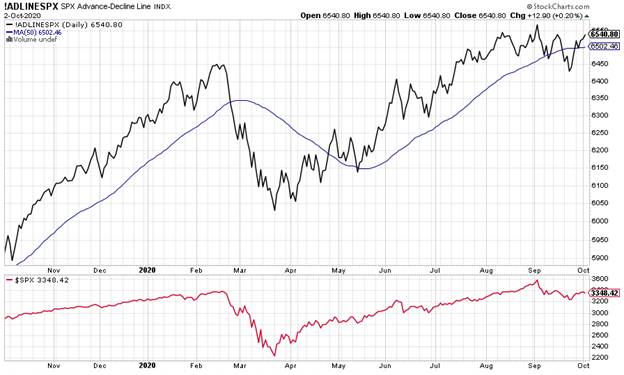 During periods of high stress in the financial markets, the fear and stress will be in full display in the Bank of America High Yield Option Adjusted Spread. The lower the spread, the less fear of cooperate defaults in this half trillion-dollar high yield bond market.

Ladies and gentlemen, I have been writing exhaustively over the last several years about the great secular bull market that I believe we have been in since early 2013. My opinion remains unchanged. Market consolidations and good, market corrections are healthy and crashes cleanse the markets of excess risk as well as investors that have not performed adequate due diligence. Secular bull markets are formed by disruptive changes including the three prior industrial revolutions and now the fourth. These changes and disruptions to normal societal ways function to create doubt in the investor’s minds. Most investors don’t understand change, so they doubt it. Informed investors see the change, the future and embrace it. I felt compelled to directly address since all the naysayers compare today’s market to 1999. Most weren’t advisors or in the money management business at the time - I was. In my opinion, there are simply no comparisons to 1999 and I believe the greatest examples of this is the $5 trillion dollars in cash sitting on the sidelines. I’m sure those funds will flow into markets; margin debt will soar just as greed peaks and the bubble will pop similar to 1999.