First and most importantly, I would like send our thoughts and prayers to all those impacted by this horrible virus and extend our deepest gratitude to all the first responders, medical professionals, businesses and communities that have deeply sacrificed to help us though this difficult period.

You are all in our team’s thoughts and prayers.

During the Great Recession in 2008 – 2009, the response from the federal government was the following and various additional programs: lowering of the Federal Funds Rate, issuance of short-term funding loan programs, loaning of money to facilitate money markets as well as establishing programs for commercial paper lending facilities. While the government’s intention was good and pumped billions into the credit markets and various other simulative programs, it was faced with the daunting task of creating a playbook to confront a massive recession as well as a completely dysfunctional credit and banking system that was in chaos. These programs took the federal government over 500 days to create and implement. In the end, the response was entirely too long to minimize the impact to the economy.

Fast forward to today. The federal government took unprecedented steps to act quickly and decisively with immense fire power. In less than eleven weeks, the Federal Reserve announced and launched the following programs.

These are only a few examples of the numerous programs announced by the Federal Reserve and US Treasury that are targeting many aspects of the economy, of which through the government’s support and stimulus will greatly help the economy bridge the time needed to navigate through this pandemic. Additionally, in March, the G-20 (an international forum finance ministers and central governors from 19 of the world’s largest economies as well as the European Union) pledged to inject over $5 trillion into the global economy. 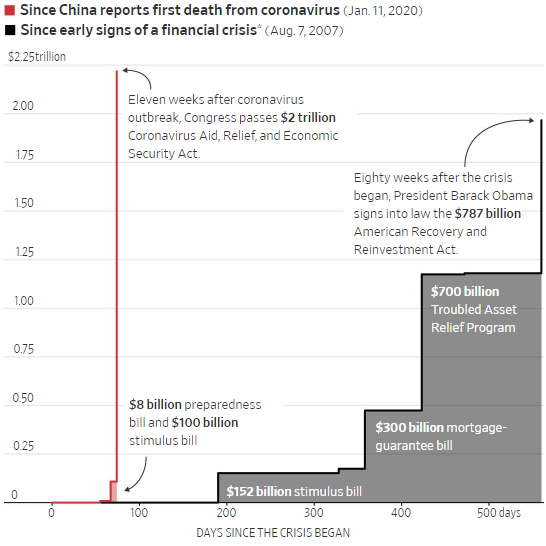 Volatility Closes at an All-Time High

We have witnessed truly unprecedented times of instability during the month of March. Beginning with the S&P 500’s four week drop of over 30% and the Volatility Index or VIX closing at a record high of 82.69, combined with ETF trading eclipsing over 40% of the trading in a single day, all these events corresponded with large dislocations in many markets. A further sign of uncertainty and fear in the markets has been the difference of yields between US Treasury bonds and the Bank of America US High Yield Index. The spread between these two rates hit highs which haven’t been seen since the Great Recession in 2008. While prior periods of extreme volatility have led to short-term lower prices in the S&P 500, the result has been fairly consistent – higher prices in the intermediate- to-long term and a return to stability. 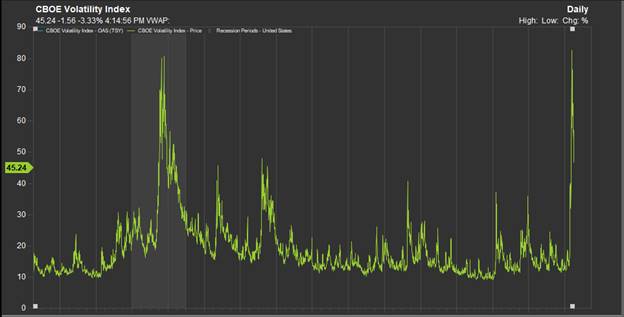 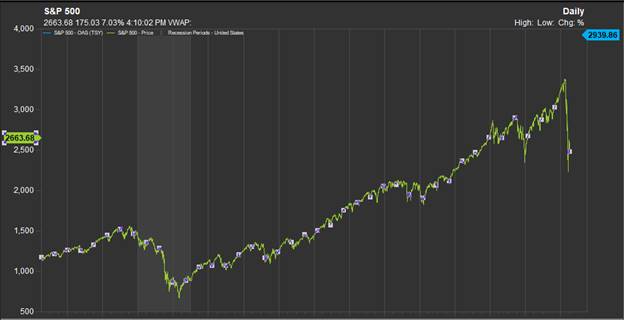 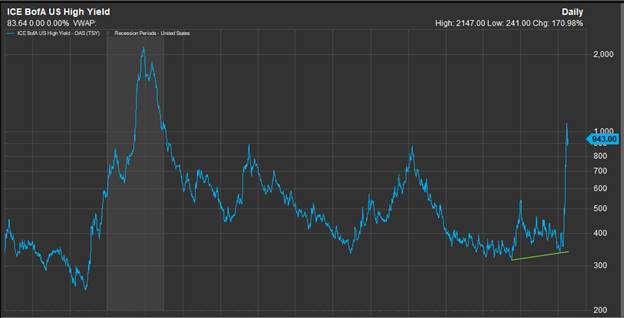 Periods of instability create periods of stability. For example, the 1987 stock market crash resulted in a 22.6% drop in the S&P 500 on a single day. The blame for that crash was the beginning of what’s known today as algorithmic trading, portfolio insurance, stop-loss triggers (executed as prices plummeted) and various other technical components designed to mitigate trading losses. Immediately after Black Monday (October 19, 1987), Federal Reserve Chairman Allen Greenspan lowered interest rates, flooded the banking system with liquidity and restored confidence in the markets. The crash of 1987 resulted in a 35% correction from peak to trough and took approximately 22 months to recover before going on a bull market run for 11 years and 360% price appreciation before peaking in spring of 2000. The bull market that began in 1982 ended in spring of 2000, not in 1987. The Great Recession of 2008 through March of 2009. A 40%+ correction in equity markets that was contained by an aggressive Federal Reserve and Treasury Department that rewrote the playbook for crisis management. We all know how that played out for the next 8 years. The important takeaway – short-term extreme levels of instability have generally created extended periods of stability for investors.

America is a great country with a rich and diverse history. Our country leads the world in technology, artificial intelligence, biotechnology, heath care, pharmaceuticals and many other critical global industries. We are also a country that rises to the occasion. Not only do we overcome adversity, we thrive afterwards. We have the brightest minds and most caring individuals. We will work through these uncertain times and, like our history has proven time-after-time, will find a solution for this crisis. When we exit this period in history, we will be a better and more compassionate country, united and prouder than ever to be an American.

As always, please don’t hesitate to reach out to the office if you have any questions. On behalf of our entire team, we wish you and your family health and happiness through these unique times.